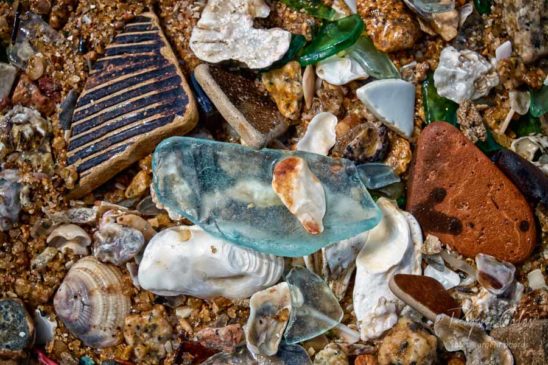 Well, the caption beneath the accompany image just about says it all.

There’s this beach in Hong Kong which seems to be at the confluence of several ocean currents and a fair amount of wave action from ships passing by the area. That is one thing.

How come all this broken glass, building rubble and other artefacts ended up here is beyond me? The beach, itself, is quite clean. It’s not as though this is or was a dumping ground. It’s near an industrial area where there are several concrete batching plants. There are some of Hong Kong’s more primitive residences nearby – as in “undocumented” single storey houses [improvised shacks by any other name] and fisherman’s shacks support on stilts at the water’s edge.

I had walked past this little peninsula on several occasions but, had never really paid it any attention. That is, until one day I decided to walk across it and, in doing so, paying a little more attention to what was there.

Initially and, as impressions go, it was just rubbish – beach rubble. And then, there seemed to be more to it. I had my camera with me and took a few shots. More for reference than much else. There didn’t really seem to be anything there other than this sort of “exotic” mix of seashells, sand, stones, broken glass that been weathered down, artefacts of chinaware, discarded electrically goods, building rubble and personal effects as in bits of shoe, clothing, hair clips and the like.

I got home and looked at this initial take. I didn’t really like what I had there but, there were possibilities.

Since then, I’ve been back to this beach a few more times. And, on each occasion, seem to get better at composing and framing – looking for elements that either complimented each other or were totally abstract.

As I made my pictures I tried not to “interfere” with whatever I was “framing”. As I saw it, it was a matter of, “this is the way it is” and wanted to leaving it like that. This is much of what we have here in this collection.

I’ve called with selection “Treasure Beach” because it was just that – “Treaure”. This title has no bearing on the location. For those who may chance upon this spot, there’s nothing there, just a strip of sand. But, on closer inspection, there’s this “treasure chest” of wonders.

The process of photography in making these images was as basic as it was straight forward. I used a FujiFilm X-T1 and a kit lens and that was it.

As part of my digital workflow, to process these image, I used Capture One 9 to convert the .RAF RAW files. Once done, I converted the images to 16-bit TIFF files and then worked them through Nik Software.

The collection is made up of 12 images. We are offering prints ranging in size from 12 by 16 inches up to 30 x 40 inches. There are two types of finishes – matt and lustre. More details can be found on the Treasure Beach product page.

FEATURED WORK: Rogan’s work is featured on the following websites:

You can find out more about Rogan and why he does what he does here on his ‘Artist’s Statement’ page.